Lucas was born in Sao Paulo, Brazil and started playing drums in 2001 at the age of 7 and since then most of his activities are conected with music. He began to work professionally at age 18 as a hired player.

Currently residing in Los Angeles and graduated at Musicians Institute (MI), Lucas has put his talent playing in some bands and projects in town, a few ones along with Lamps (brazilian music producer, mixing/mastering engineer), where he also worked as studio assistant, drum tech and as hired drummer for some artists.

Nowadays Lucas is performing as studio and live drummer playing around with incredible bands and artists in California.

Lucas is that kind of person who love what he does. Yeah, kinda cliché but life is full of clichés, isn't? He has been involved with a slew of projects, either as a hired drummer, drum tech or a collaborating.

In this section you can find some of the special projects from all the freelance concerts, gigs, recordings and sessions that make up his musical career.

What they are talking about me 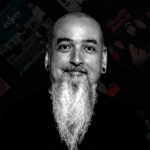 Interested in working together? Grab a beer or a coffee? Feel free to send a message!